Before the hair cut... 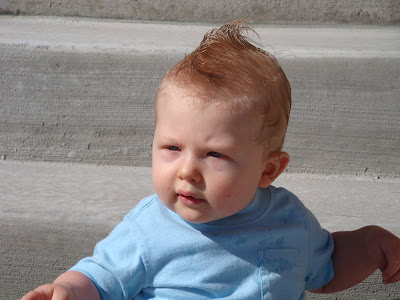 During the hair cut... 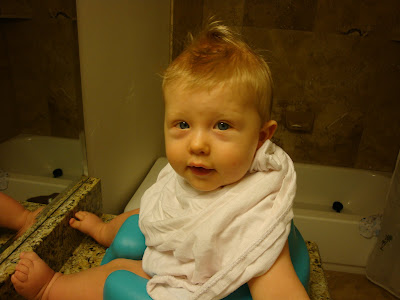 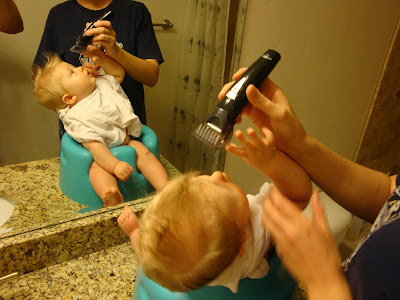 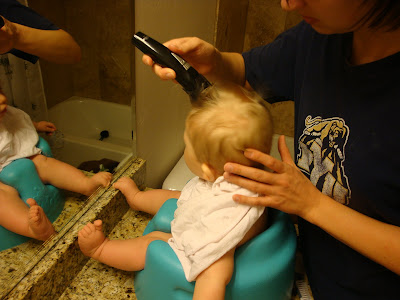 After the hair cut... 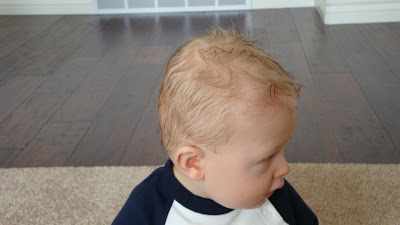 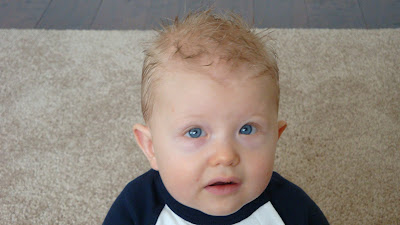 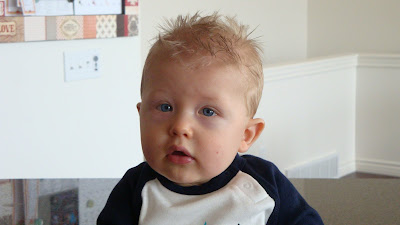 Maybe my next job should be a hair stylist? It was hard seeing all those blond locks in the sink. A first hair cut is a BIG DEAL but I have to admit, it does look better.

"Fat Guy In a Little Coat"

... I mean, shirt. I worked Friday night. I came home, slept and when I woke up, I found my son wearing a shirt way too small. His dad thought he looked endearing. I guess I need to clean out the closet and store the clothes that are too small. I usually dress McKay every day so I just know what not to put on him. Gary says if it's in the closet or drawers, it's fair game. It was pretty funny though. It wouldn't cover his belly (aka, "muffin top" in Gary's words). I promise, I didn't take him out of the house! 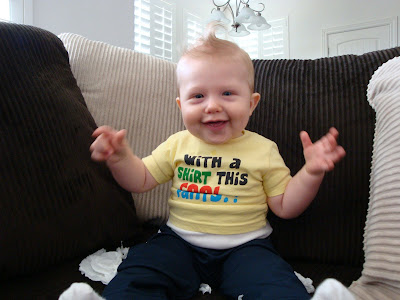 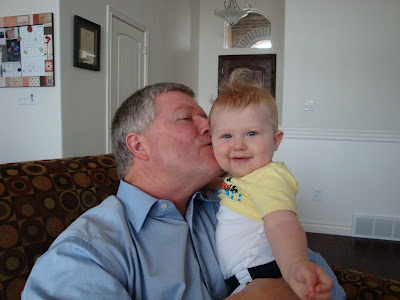 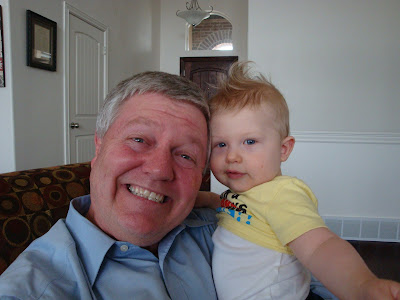 By the way, the shirt says, "With a shirt this cool, who needs pants?" A gift from one of our good friends. I considered taking his pants off but then wondered to myself how white trash could we really get? And for the record, I don't think our son is fat at all!
Posted by Gary and Jadee at 12:50 PM 1 comment:

I'm not going to lie, it's been a month since my last post but I think I have been in a winter funk. I have had no desire to blog. The weather is blah and so we have been stuck inside and that means I am also feeling blah. Then I think how all I blog about is McKay and I bore you all to death...so I just don't blog. Blogging is hard work sometimes. It takes a long time (not like I don't have time) and it's hard to be creative. But this is my journal so I need to get crackin.

Gary's sister and brother-in-law invite us each year to go to a family friends' cabin every February. We have never been able to make it but this year, we did! And it was FABULOUS! We were still in Utah (we were down by Brain Head) but it felt SO GOOD to get out of the house and be somewhere new. The cabin was huge and gorgeous and a lot of fun. There was great food, sledding, snowmobiling and the best part? Not having to get ready for a few days. It was nice to stay in sweats, read, play games and eat!

McKay turned 8 months old on the 6th and he thinks now that he only needs 1 nap a day. This momma is NOT okay with that...especially on the days she comes home from work. He is just loving to discover the world around him and feels there is too much to do instead of napping. Here are some things about McKay to date:

*He loves food. Could you tell? He has liked all his baby food from vegetables to fruit to cereals. He also likes "adult food." He loves, loves, LOVES spaghetti! And I gave him a piece of dry toast today and he inhaled it. He takes big bites out of not so soft food and tends to gag himself a lot. I have to fish food out of his mouth but it's fun to watch him try new foods. I would love a non-picky eater like his dad because I am the pickiest eater out there!

*He can't crawl yet but rolls from side to side and eventually skoochs himself to what he wants, usually the door stopper!

*He doesn't have any more than the 2 bottom teeth but still drools a ton and we're just waiting for the upper teeth to pop.

*McKay loves books and being read to. His favorite reader? My dad. If you haven't ever heard my dad read a book to a child, you should. He is AMAZING doing all of the voices of the characters and McKay sits entranced.

*McKay is wearing 12 month clothes but I will soon be looking for 18? month pj's. I like the one piece pajamas but his feet are just too long for the 12 month. We just got him a bigger car seat that holds up to 100lbs because, well, he was way to big for the baby car seat.

*He has more hair (curly!) than I know what to do with. Many are telling me it's too shaggy and to get it cut and other's say it's cute and he's too young to have his hair cut already. I personally think it's a bit long but I love the loose curls on top of his head. He is still so blond, blue eyed and fair skinned.

*He still loves to cuddle!, but only when he is super tired and it's time to eat. I cherish bed time and snuggling. Bedtime is my most favorite time of day. A clean, "baby-lotioned" baby wrapped in a blanket sleeping in my arms. This momma is happy!

*McKay is not weary of strangers yet. He will go to anyone whether he has ever met them or not. He dishes out smiles left and right and is still such a happy, content baby. My dad has often commented to me that Gary and I have a special baby boy and I couldn't agree more! I am trying to teach McKay a few of the basic sign language signs so hopefully as he gets older, he can sign a few words and I will know what he is saying rather than dealing with any screaming. I don't know if he is getting any of it yet but I am trying to be consistent with it. Hopefully the few words will stick with him!

I'm getting so sick of respiratory season at work. All I do is suction snot out of sick babies who can't breathe. And then McKay has been sick a lot this winter. Not bad sick but enough to make me sad that I'm probably bringing everything home to him, despite trying to be so careful. We don't go out much because I am a little anal about the cold but he has still had multiple colds this winter. Poor boy. He doesn't even flinch much anymore when I get out the suction device and go to town on his nose. We are DONE with winter. 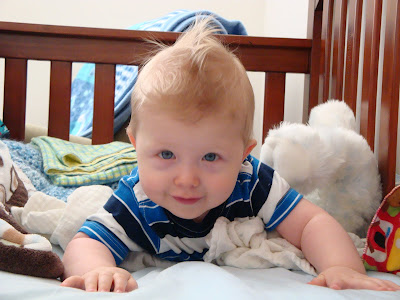 He should have been taking a nap here. But after an hour and a half, I realized it was useless and he was all smiles 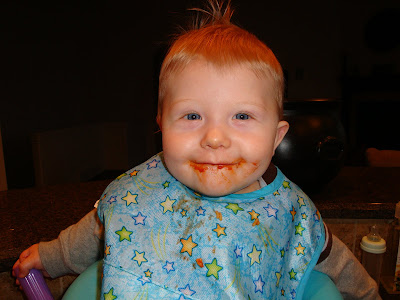 Sorry about the dark picture but this is McKay trying spaghetti for the first time. 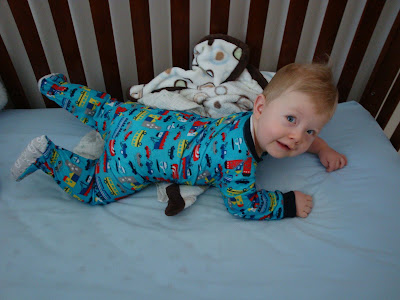 The snow that fell at the cabin the weekend we decided to go. No, this isn't the cabin, just the storage shed. I wish we would have gotten a picture of the gargantuous hotel!

I don't consider snow pretty very much but this weekend, I did.

Two little "mommas" at the cabin that were so cute and in love with McKay.

A new treat...fresh snow with apple or cranberry/apple juice for the sauce. Who would have thought? But these kids must make them often because they were in high demand this weekend! 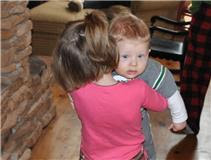 The girls would fight over who got to "carry" McKay. He was such a good sport. He is almost as big as this 5 year old. His face tells it all!
Posted by Gary and Jadee at 4:51 PM 4 comments:

Gary and Jadee
Gary and I met August of 2007 in our single's ward. We dated for 13 months and then he surprised me with a trip to New York City and proposed on a helicopter ride over Manhattan. We were married 4 months later on January 31, 2009. Marriage is great and we have had fun doing a lot of traveling. I am an RN on the Infant Unit at Primary Children's Hospital and Gary is an Internal Auditor for a company called ALSCO. We had our first baby, McKay Joseph on July 6th, 2010 and love him to pieces! We added our second son, Miles Glenn to our family May 12th, 2012 and could not fathom the joy he has brought us! 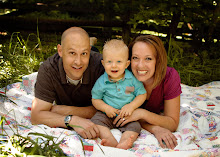 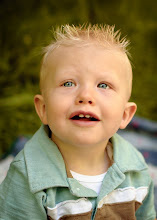 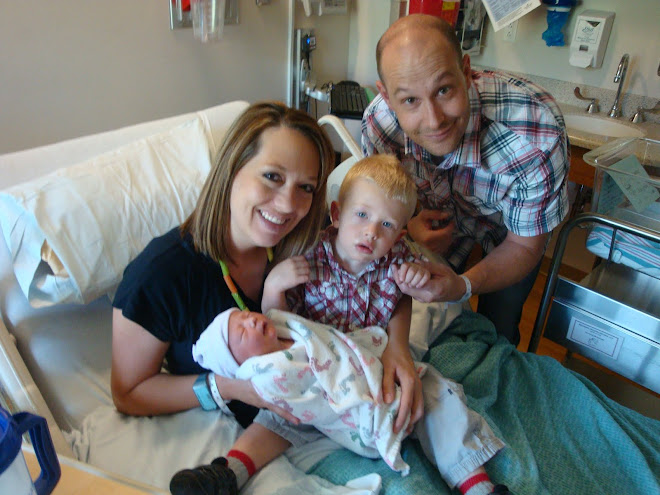